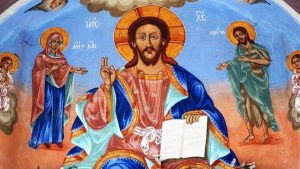 The events that lead up to Easter have been depicted countless times in art and theater on Easter plays.  From Leonardo da Vinci’s, The Last Supper, a classic painting from the Renaissance period, to more recent productions such as Andrew Lloyd Webber’s musical, Jesus Christ Superstar, in 1970.

Webber’s musical is a very secular account of the last days of Jesus and one of a long history of plays about Easter and the events leading up to it. The development of Easter plays is a tradition that dates to the middle ages and the worship practices of the Catholic Church.

As a Catholic Mass

The Catholic church has quite a production around Easter.  If you’ve attended a Catholic church around Easter, then you may have witnessed an event in which the Gospel is not merely read by the priest, but by several people with audience responsorial participation. This form of reading the Gospel is a traditional part of the mass at Easter and is actually the precursor of Easter plays. Originally, the form of these early Easter plays strictly followed the words of the Gospel, and would be either spoken or set to music.

Eventually, people developed a taste for more dramatic Easter plays and in response, characters such as Pontius Pilate, the Virgin Mary, Mary Magdalene and soldiers were included in the Easter plays by the clergy. By the fourteenth century, the plays had developed into multiple and distinct Easter plays, many identified by the church or monastery that developed them.

The development of plays featuring additional characters surrounding the life of Jesus, as well as the public’s desire to see more about the life of Jesus in the Easter story plays, led to the development of the Passion Play, which is a more comprehensive story of the suffering of Jesus leading up to the death of Jesus on the cross.  Also, while the Easter plays were indeed popular, as they grew more secularized, they also grew less solemn and respectful of the religious roots of Easter. As a result, some religious leaders prohibited the production of the more secular Easter plays.

The Protestant Reformation of 1517, led to the development of rifts in Christian church and led to a wider ban on the Easter plays as a way to avoid uneasiness about dramas based on the Gospel. The Easter plays did not gain in popularity again until the 1700’s and 1800’s, when they were rediscovered and once more celebrated.  Production of the solemn as well as newly inspired Easter plays and musicals has continued until the present day.  It seems that the popularity of the Easter plays are here to stay, both as a religious and as a secular celebration of one of the most key Christian holidays.